For the first time in history Para badminton was a part of the Paralympic schedule and although Australia’s Para badminton scene is young, two athletes were selected to wear the green and gold and compete with the worlds best! As with the Olympic leadup, the Paralympics were a light in the darkness that has been the global pandemic and for many around the world a great escape from a challenging time.

For our Aussies it was a great experience and both Caitlin Dransfield and Grant Manzoney and their coach Ian Bridge will forever be etched in history as badminton’s first Paralympians.

Caitlin’s first match saw her up against the overall third seed Norwegian Sofie Sagoey. Caitlin was able to start strong and get a lead early before letting Sagoey get back into the game. Caitlin continued the game with some superb technical shots but fell short at 17-21. The second game Sagoey was able to push Caitlin, using her power to out muscle Caitlin and gain more control over the game, ending the match 21-13. 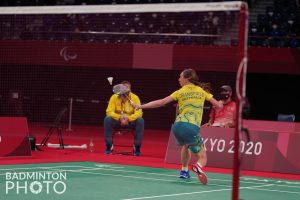 Caitlin’s second match was against Chanida Srinavalkul from Thailand. The match was in contrast to her showing against the 3rd seed with Caitlin unable to string together a series of points to put pressure onto her opponent. The first game was a short one, an average rally length of 3 seconds and over in 9 minutes, our Aussie went going down 8-21. Caitlin dramatically improved into the second game pushing her opponent to a more even match with both players stringing together a similar number of consecutive points (Caitlin with 4 and Chanida with 5). Unfortunately for Caitlin she was unable to get the second game, and ultimately the match, with her Thai opponent winning 21-16.

Caitlin’s final match was the most intense of her Paralympic campaign, the 39-minute match time belies the intensity of the match which went down to the wire. Her opponent Olivia Meier from Canada started very slowly, Caitlin was able to dispatch of the first game in 10 minutes winning 21-7 and looked to be right on top. Going into the second game Caitlin would have been full of confidence knowing her first game went 9 straight, but it wasn’t to be, Olivia was on top with Caitlin every few points stopping Olivia’s flow. The second game went to the Canadian 21-13 leaving the score at 1-1, meaning the third game was going to go down to the wire, and it did not disappoint. The third was a see-saw affair, the Canadian took an early lead quickly nabbing 6 consecutive points before Caitlin was able to stem the flow and draw her way back inch by inch. Caitlin never strung more than 4 points together but was able to pull back more than she lost and was able to even the leger at 20-20 and again at 21-21 before losing the game 21-23 and the match 1-2. 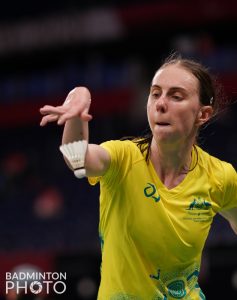 Grant arguably had the toughest draw, facing two South Korean athletes, including the world number 1, Grant was up against it to start. In his first match Grant faced Kyung Hoon Kim and by his own admission was a little overwhelmed by the moment “My arms felt like concrete”, but as the game went on, he was able to shake off the nerves and settle into the match. Although the score line was not flattering towards Grant, being able to take points away from Kim Hoon Kyung and playing in the moment allowed Grant to reset for his second match. 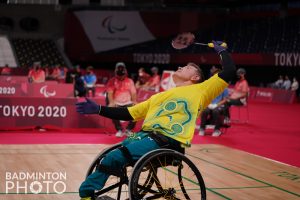 Grant’s second match saw him come up against a previous world number 1 in Jung Jun Kim, and although on paper this match would be a walk over, Grant was able to steel the nerves from the first match and put together a showing of his skills against an extremely accomplished player. Speaking with coach Ian Bridge he said, “Grant played out of skin in that match, it was really promising to see him pull out his best badminton against the best in the world, particularly given his run into the Paralympics”. Finishing up the match in a better position than his first match (8-21, 9-21) Grant headed home as the first Wheelchair athlete to represent Australia in Para badminton, all the better for the experience and with eyes on the Australia National Para Championships and the 2022 Oceania National Championships. 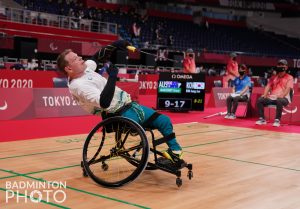 To both coaches of Caitlin and Grant in their home state of Western Australia, we’re sure you are as proud as the country is. Badminton Western Australia, thank you for supporting these two in chasing their dreams, to Paralympics Australia for helping expose Para badminton around the country and to furthering its development as a pathway for future Para athlete. Also a big thank you to Badminton Oceania, Ian Bridge, AIS and Sport Australia for all their support of Paralympics in Australia that endured this first step to a very bright future for para-badminton in Australia!

Crown Group is a highly successful property development group, with a reputation for building globally leading luxury and hotel apartments. The Crown Group has been a supporter of the Australian Badminton Open.

Commonwealth Games Australia (CGA) is a member-based organisation that administers, controls and coordinates the participation of program sports at the Commonwealth Games every four year. Badminton Australia is extremely proud of its work with CGA and is keen to continue such a great relationship with the staff at CGA into the future.

The Australian Olympic Committee (AOC) is a non-government, not-for-profit focused on developing youth and sport. The AOC is responsible for the funding, supporting, selection and sending of Australia athletes to the Olympics every four years. The AOC provides significant support to the Australian Badminton Falcons and the Badminton Australia Performance Pathway. Badminton Australia is very thankful and is perpetually excited for Australian badminton players to represent their country Olympic Games.

The Australian Institute of Sport (AIS) is the second arm of the Australian Sports Commission, the focus of the AIS is at all aspects of high-performance sport and as a result Badminton’s High-Performance teams work with the leading minds at the AIS. Badminton Australia has been working with the AIS for many years and with a continued focus on high performance excellence, both home and abroad, is excited to continue to work with the AIS long into the future.

Li-Ning is a global leader in sports apparel, with a focus on badminton, Badminton Australia is proud to be partnered with an organisation with such a rich and successful history in sport and for it to support the Australian Badminton Falcons. Li-Ning has supported Olympic medal athletes across the world and continues to push badminton apparel forward.

Sport Australia is an arm of the Australian Sports Commission that is responsible for the broader sport sector. Included in their responsibilities are participation, governance and supporting activities that link to the sport industries growth and sustainability long term. Badminton Australia works closely with Sport Australia in areas of participation, governance and other sport related activities.

YONEX has been a supporter of the sport of badminton globally since 1957 when they produced their first badminton racquets. As the business has expanded so too has their equipment and apparel offerings. YONEX has supported badminton in Australia at all levels for a number of years and badminton Australia is very excited to continue its relationship with an organisation that has been involved in the sport for so long.